Posted in Temporary | Comments Off on MUSEUM OPEN – Masks Optional

Years ago, when we needed screws, nuts, or bolts, my dad didn’t go to the hardware store. The first trip would be “down cellar” to the pan of mixed hardware. Dad would look through the assortment and pick out what he wanted. On many occasions, he would turn to me saying “ find me some more just like this.” I would take a large bolt and rake through the pile until I found some that matched.

If something was being discarded and there were screws, nuts, or bolts that could be easily salvaged, the pan would be replenished. Today I drive to Oak Hill, where the fastener room at Ace Hardware stocks what seems to be every fastener imaginable.

This old pan has been sitting untouched for decades. It served us well at one time, and I hate to junk it. Today its only purpose is to provide me a pleasant memory of my childhood.

Do you have a memory you would like to share in the newsletter? If so, forward it to the editor at scarboroughhist@gmail.com.

The Pictures of the Week selections for 1.20.23 from the Scarborough Historical Society include one of the most unusual pictures in our collections. The picture is of a water wheel that was on the Rufus Carter farm located near the intersection of the Payne Road and Scottows Hill Road, the only picture of a water wheel I’ve ever seen recorded in Scarborough. Other images include those of the Carter farm home that burned in 1919 and some of the family members who lived there. Also included is a view of the intersection of Scottows Hill Road and Payne Road as it looked in 1909. We’d love to hear from anyone who has a broader knowledge of water wheels in early Scarborough. 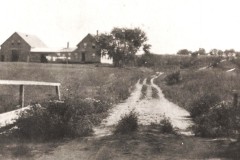 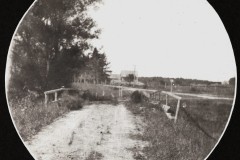 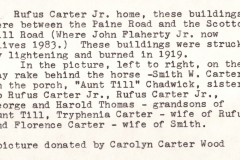 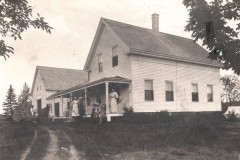 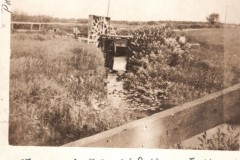 Payment to inhabitants for part of Scarboro annex to Gorham
by Act of Legislature of 1864.

This may certify that the
Assessors of the town of Scarboro
Have apportioned to the inhabitants
Of that part of Scarboro set off
And annexed to the town of
Gorham by act of the legislature of
1864 the sums due them under
Acts of 1868 and 1870 and
Have committed the same
to Cyrus F. Moulton Treasurer
of Scarboro who will pay
said inhabitants said sums
the 26 day of Aug 1870
Scarboro Aug. 11 1870

From the Scarborough Historical Society’s digital collections come these pictures of an early Pine Point tourist destination, the Pillsbury House, that opened its doors for lodging and shore dinners in 1875. Included is a picture of the Pillsbury House staff circa 1890, a 1946 advertising card, and pictures taken during the razing of the building in 1985. 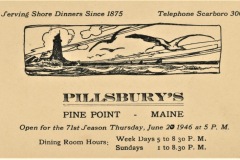 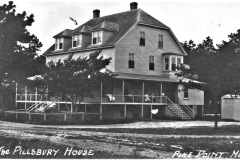 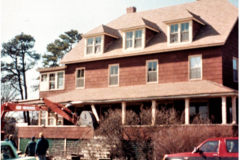 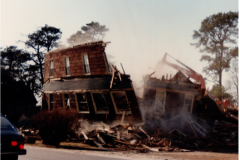 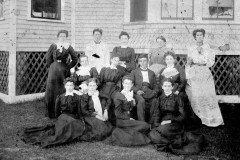 As we enter the new year of 2023, the Scarborough Historical Society will be providing a “Picture of the Week” on various topics and periods in Scarborough’s rich history on the Facebook group page Scarborough, Maine History and on this website each Friday.

If some of you have pictures, newspaper clippings, scrapbooks, and documents that we all could share, please call the historical society (885-9997) so we can arrange a time for your images into the society’s digital collection to be scanned. You keep your pictures, but we have the images on our computer, to be saved for many years to come.

The first Picture of the Week is a memory from 1970, a picture of the members of Scarborough’s first Town Council after the town moved from selectmen and the town meeting system.

Saco October 9, 1812 on this page is a true copy of the dividing line between the town of Saco and Scarborough.

To the clerk of the town of Scarborough—

We the submember having been appointed committee by the General Court of the Commonwealth of Massachusetts, agreeable to a resolve of said court passed this 25 day of February A 1812 settle and fix the boundary line between the towns of Scarborough and Saco having notified the Selectmen of each town to meet at the dwellinghouse of Capt. Joseph Bradbury in Saco and Tuesday the sixth day of October A 1812 after hearing the parties have proceeded as follows. Beginning at the place which we have determined was the mouth of Little River year of 1743 at a state near the seawall thence running a Northwest Corner to a part near the Upland marked S.S. from thence the same corner by trees marked as aforesaid to a stone set down the Northwesterly Side of the County Road about 5 feet in length and a large stone put buy it 3 rods and 11 links Easterly of Levi Merrills dwelling house from thence the same corner to an elm tree standing on Timothy Stuarts’s land about 10 feet south of T. Stuarts  well and thence the same course by trees marked S.S. to the head line of [?] town adjoining Buxton to a stone set down in the ground and two large stones by it the aforesaid line we have unanimously agreed to established as a dividing line between the towns of Saco and Scarborough

From: Encapsulated Collection #25.  Copy of the dividing line for the towns of Saco and Scarborough.

Posted on January 7, 2023 by Karlene Osborne

The roof is finished and the first coat of paint is applied. It is enclosed for the winter!

We have raised $163,000 toward a goal of $280,000. Please help us restore this historical site by sending your tax-deductible 501(c)(3) donation to Scarborough Historical Society and Museum, P.O. Box 156, Scarborough, ME 04070-0156. Call the museum at 207-885-9997 if you can provide in-kind services. Or donate through https://www.gofundme.com/SHS-Restore-Beech-Ridge-School. Thanks to all who have graciously donated to preserve this part of Scarborough’s history.

On the Education Page

On the Vital Records Page (FC13)

Those that have been admitted into full communion.

I updated the Oakman Family entry to include:
“Some of the Descendants of Josiah Oakman of Spurwink River in Scarborough Maine.” MHGR, Vol IV, Pages 268-277 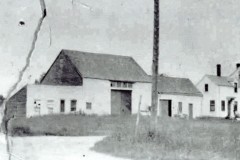 I reorganized the original “Main Page” to move the Library items to three separate Pages:

An interesting picture has surfaced that expands our knowledge of Scarborough’s past. From a photograph and accompanying notes, we learn about an event that must have caused some excitement in Scarborough in the early 1940s. Shortly after music teacher Miss Steele started teaching in the Scarborough schools, she directed a cast of students in the Gilbert & Sullivan production HMS Pinafore. With Charlie Kilby playing the role of Captain, the group was invited to perform at City Hall in Portland. This was a family affair, as the girls’ dresses were crafted by mothers, grandmothers, and other volunteers out of material reported to be dark blue with stars on them. A town school bus transported the children to Portland. We are fortunate to have a picture and the names of the young actors taken on the steps of City Hall. If anyone can contribute more information on this event, please let us know.

According to the information provided with the photo of Elizabeth, she:

NOTE: This Dorothy Shaw (aka Dora Shaw) should not be confused with historian Dorothy Shaw Libbey, daughter of Oscar & Mary Shaw, who married Clark Libbey in 1926.