Time to give everyone an update on our schoolhouse project.

Stanley E. Hillock Well Contractors of Scarborough worked to repair the well pipe that was damaged. Photo by Tom Osborne

First, the well has been checked, free of charge, by the Stanley Hillock Well Co.  They replaced the cap, cleaned and deepened the well from 68 feet to about 200 feet. We are very grateful for their generosity.

Next, Steve Ross has surveyed the property so that we know our boundaries. He will also place pins, marking where the new foundation needs to be, so the building can go back to its exact, original location.

During the week of July 8th, Merry and Sons Movers began work on preparing the building’s move. Their goal was to move it in 4-5 days. The excavator asked that the building be moved from the area of the foundation and then moved back. Merry and Sons agreed to move in it back rather than to the side as originally planned, allowing more room for the foundation work to take place. Trees needed to be limbed before this move.  Scarborough Public Works came quickly to our rescue. We truly appreciate their timely help.

Front porch removed and schoolhouse up off the foundation. Photo by Joyce Alden.

The porch on the front was no longer securely attached to the building, needing a speedy repair or its removal.  Since it was not original to the building and in poor condition, it was removed. It will be replaced later.

As the Merrys started to put a support under the building, it was determined that THREE steel beams for permanent support, rather than two, as previously thought, would be needed.  Next bricks were removed to put in the support beams. It was found that the mortar between the bricks had almost completely dried out and was no longer holding the bricks together.  It was just a matter of time before the original brick foundation would have begun to collapse.

On Thursday, another problem presented itself. The back addition to the original building needed more reinforcement in order to move it with the rest of the school.  The addition sill and one wall were too rotted to support the move.  Support beams were placed differently to safely allow the move.

The schoolhouse moved back free of the old foundation. Photo by Joyce Alden.

The Beech Ridge School now sits on cribbing and beams awaiting a new foundation. We are in the process of salvaging the original bricks from the rubble and cleaning them for use as a facing to the new foundation.

On Sunday and Monday, a group moved the bricks from the building area to the sides so we can save them and hopefully use them to put a brick facing on the foundation so it will look original. Thanks to Scott Chase and Boy Scouts from Troop 39 as well as Joyce Alden, Charlie Alden and his sister Peggy and Dennis Holmes.

Excavation begins for the new foundation. Photo by Karlene Osborne

On July 31st, Jeff Greenleaf and his crew began the excavation for the foundation. He estimates that it will be done by the next day.

Donations to the Beech Ridge School Restoration Project may be made at “Go Fund Me” or in person at the museum, Tuesdays 9 AM to Noon (or the 2nd Saturday of the month from 9 AM to Noon).

Photos of the Project, so far, are posted to our Beech Ridge School Project Gallery below. 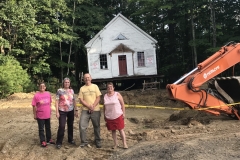 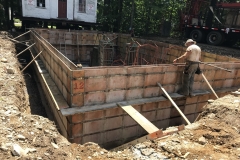 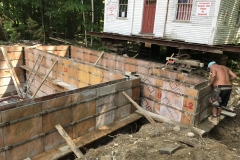 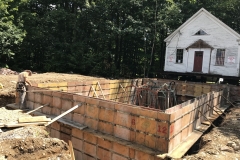 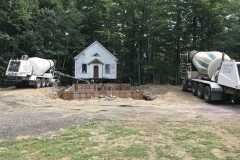 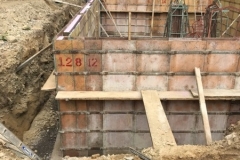 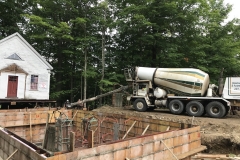 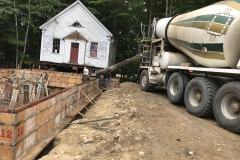 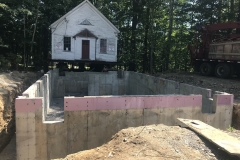 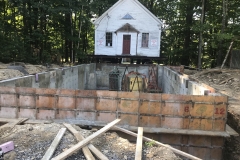 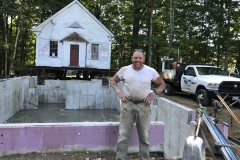 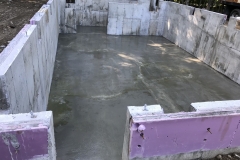 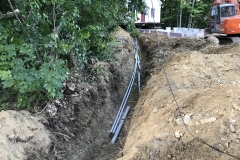 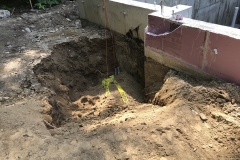 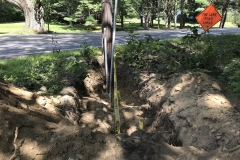 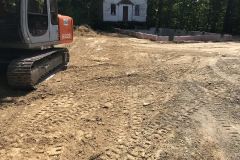 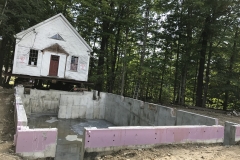 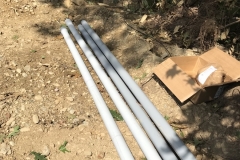 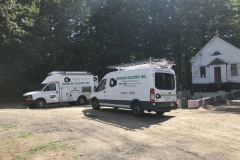 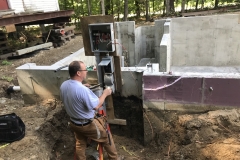 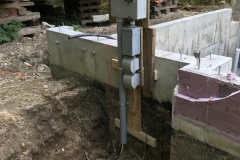 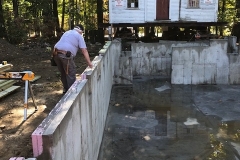 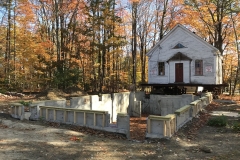 This entry was posted in Beech Ridge School. Bookmark the permalink.